There’s no shortage of cool things out there on the market. Floating speakers, watercolor sound systems – these are just examples of what you could decorate your home with. 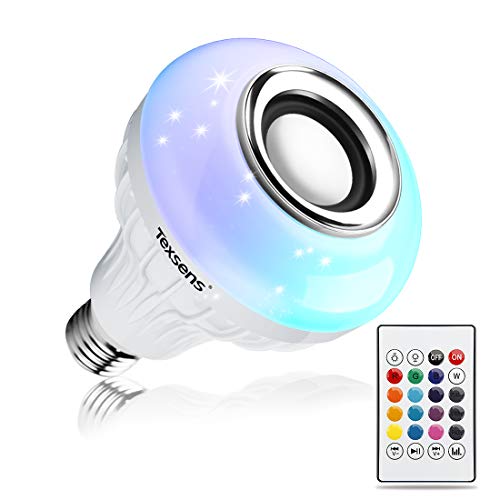 The Texsens LED light bulb speaker not only serves as a speaker but also delivers a good amount of light. With its output power of 6 watts and luminance of 400 lumens, it should be good for serving its primary purpose, which is illumination. And because it has a cooler color temperature of 5700-6300K, we think it’s going to work well as a working light.

The thing that interests us today – that is, speaker functionality – is decent in this speaker light. The speaker in this thing has 3 watts of power and a frequency response of 135-15,000 Hz. It can’t boast too great sound quality, but since speaker lights are more about their cool factor, this is perfectly alright.

Aside from the speaker, the Texsens bulb has a 3W RGB LED light in it. The colors of the light can be adjusted via the remote control included with this speaker light. The remote also allows you to dim the lights, change the track, adjust the sound volume, adjust the brightness of the light, and switch flickering on and off.

By the way, the remote may be used to control multiple Texsens bulbs at once, which will be handy if you get a couple of these speaker lights.

It’s great that Texsens includes a remote control with this light, but some people may want to control their speaker bulb via a mobile app instead. Unfortunately, it seems that there are no apps that this Bluetooth speaker light bulb works with, so you’ll have to stick with the remote. 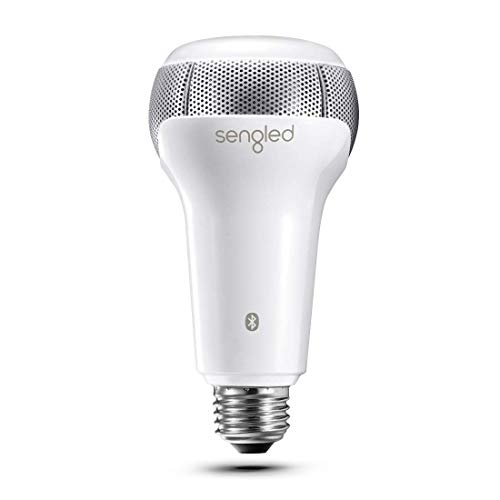 If you don’t care that much about colors and wish to have more light, the Sengled Solo smart bulb may be the right choice for you.

The Solo bulb is rated 9.5W and delivers 550 lumens of luminance, which is similar to what 40-50W incandescent bulbs have. In addition, the Solo bulb has a warmer 2700K color temperature, which may be more to your taste, especially in a bedroom setting.

In terms of sound, the speaker in the Solo bulb is somewhat similar to that in the Texsens bulb. It is likewise rated 3W, so it is going to deliver a similar volume. But its frequency response is different – it stands at 260-18,000 Hz. Thereby, the Solo smart bulb will be worse than the Texsens bulb in the bass range but better at the higher frequencies.

A thing that you may also like about the Solo bulb is that it may be controlled from an IOS or Android device. If you value smart things more, then this speaker bulb may be a great buy for you. 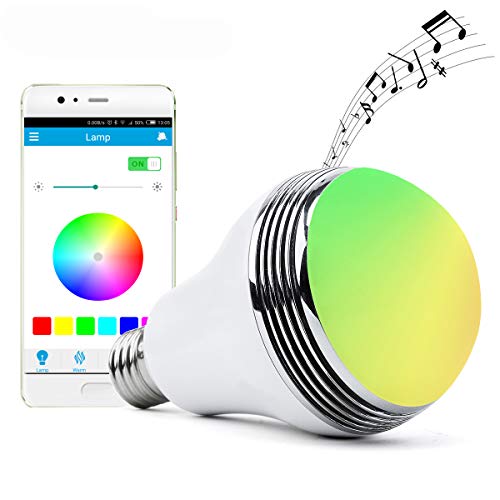 The Autai Bluetooth light bulb speaker may also be controlled via a mobile app – namely, the iLink app – but its difference from the Sengled Solo smart bulb lies in colors. Unlike the Solo bulb, the Autai speaker light has a color-adjustable RGB light in it.

It’s difficult to say how this bulb will sound compared to other models on the list since the seller doesn’t provide info on its frequency response range. The only thing we know is that the speaker is rated at 3 watts. So it should more or less deliver the same sound quality and volume as other bulb speakers we reviewed.

In terms of illumination, this bulb is on the weaker side. It’s rated 4W and has a luminance of 300 lumens. It’s going to work as a nightlight, but no more than that. And since it has a soothing 3000K color temperature, it should work well in a bedroom.

A notable downside in this light speaker, aside from the relatively weak illumination, is that it may be paired only with a single phone. So if you have multiple mobile devices, you won’t be able to use them all with this speaker bulb. 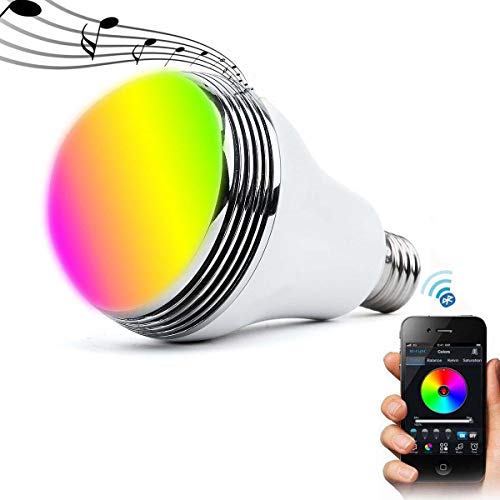 The QiLi smart bulb may seem familiar to you. Well, it appears to be the exact same speaker light as the Autai smart light bulb.

What this means is that this Bluetooth light bulb speaker can serve as a backup option for you when the other light isn’t available, and vice versa. And besides, you may go for one or the other based on their price.

When it comes to specs, the QiLi led light bulb speaker seems to be identical to the Autai speaker light. It has got the same 3W speaker and delivers the same 300 lumens. QiLi doesn’t say anything about the color temperature of this light, but it should again be 3000K, like it was in the Autai light. Thus, this bulb would work well in a bedroom setting.

As for the downsides, they are the same as well – namely, the light is a bit weak in this bulb, and it again pairs with only a single device. 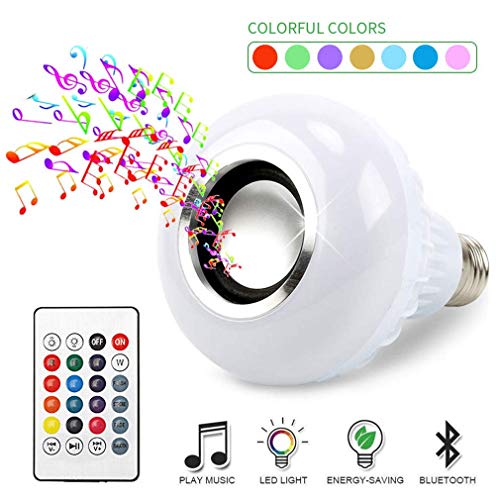 And the last bulb on our list of best light bulb speakers is a speaker light by BSOD. This light seems to be awfully similar to the Texsens bulb we reviewed in the beginning. And while these two speakers are indeed very similar, there is a crucial difference between them.

The BSOD speaker light has an E27 base, while the Texsens bulb has an E26 base. This means that they can’t work with the same bases, so you’d need to make sure that you have an appropriate base in your room.

Other than that, the two bulbs seem to be identical. This applies to the speaker power, frequency response, as well as the power rating of the light. BSOD doesn’t indicate what the color temperature of this bulb is, but it again should be 5700-6300K.

Like it was with the Texsens bulb, this speaker light comes with a 24-key remote control that allows you to adjust the music playback settings, as well as the color and brightness of the light. Likewise, it seems that the BSOD bulb doesn’t work with any mobile apps, so do keep that in mind.

Things to Look for in a LED Light Bulb Speaker

Now, it’s time for you to pick that best Bluetooth light bulb speaker. Let us help you with that by listing the things that matter in speaker lights. Since bulb speakers combine a bulb and a speaker, we are going to overview the key features related to both lighting and sound.

You’ve probably noticed that speakers have their own wattage rating. What the wattage mainly impacts is sound volume – the higher the wattage, the louder the speaker is going to be.

Generally, if the volume was important to you in a Bluetooth light bulb speaker, you’d need to go for the speaker with the highest power rating. But since all the light speakers on our list have the same power rating, they shouldn’t differ in loudness. But if you look elsewhere, you might need to consider wattage as well.

Let’s take the Texsens and Sengled Solo bulbs as an example. They had 135-15,000 Hz and 260-18,000 Hz frequency ranges respectively. While the Solo light’s speaker has a wider frequencies range, it doesn’t go as deep into the lower end of frequencies – 260 Hz against the 135 Hz of the Texsens bulb. This means that the Solo lamp is going to have a poorer bass.

On the other hand, the Solo smart bulb is better represented in the higher frequencies. For those who value them more than bass, the Sengled Solo bulb would be a better choice.

Overall, Bluetooth light bulb speakers can’t deliver as good sound as dedicated full-size speakers or headsets. The latter often cover at least the 20-20,000 Hz range, which corresponds to the hearing capabilities of the human ear. So needless to say, a light speaker won’t deliver as good of a sound.

And this is why we’ve mentioned above that light speakers are more about their cool factor than about sound.

In the end, pay attention to what frequency ranges the speaker covers and how well it is represented in the lower and higher ends.

Lights also have their own power rating, as you probably know, and it is somewhat indicative of how bright a bulb is going to be. However, lumens are more indicative of a LED bulb’s luminance.

You may consult this chart when trying to choose between different LED bulbs:

Needless to say, if illumination does matter to you, pick the bulb that has a luminance and power rating appropriate for you.

One thing may cause confusion in you with color temperature. 4000K is obviously warmer than 2700K, but in terms of colors, the higher the temperature, the cooler the color is, e.g. 4000K has a cooler color than 2700K. Keep this in mind in order to avoid confusion.

The base size arguably is the most crucial thing to look for in a light bulb. The thing is that if you don’t have the right base at home, you won’t be able to get the bulb to work.

Bulb base sizes are indicated with notations like E26, E27, E39, etc. The number in the notation refers to the size of the base in millimeters. Needless to say, you need to exactly match the size of the bulb’s base with whatever you have at home.

As you could have noticed from our reviews, some bulbs have separate RGB LED light sources in them. These allow you to change the color of the light on top of what the bulb itself actually delivers.

In terms of the cool factor, color adjustment definitely is going to be a plus in a Bluetooth light bulb speaker. Otherwise, they don’t really do much for the light, and if you aren’t after the cool factor, pick a bulb that has no RGB color lights.

It’s important to realize that Bluetooth light bulb speakers are more an eye candy, a toy that makes your room more interesting. When it comes to music or illumination, they aren’t the greatest. Speaker lights are all about their coolness.

But if you are perfectly aware of this and are just looking to decorate your room with something new, then a light bulb speaker may be a perfect item to do so with.

Best 6×9 Speakers You Need to Check Out